Once back at camp I felt lost and empty and, unable sleep, sat in my tent reading my book. It all seemed surreal now. A few hours ago I was at the summit, over 6000 metres and now I was just reading a book. I could have been on a train in England. It all seemed bizarre and unreal.

The next day we set off for a five hour hike down the Stok Valley. As we left our camp site we spotted a herd of the famous blue sheep, so much more like deer or goats than sheep. Stok Valley was beautiful as we walked along the river bed admiring the towering valley sides of craggy brown and purple rock cut into by vertical erosion.

It was amazing scenery and fascinating geology. Down, down, down until finally we could see the first scrubby willow bushes and finally trees in the river.   Sometimes we walked together chatting, sometimes we walked alone each happy with our own thoughts and content in this amazing environment. The group was split up and spread out as we climbed up over a hill to get the first view of Stok and then onto the pass marked by the familiar cairn draped in prayer f 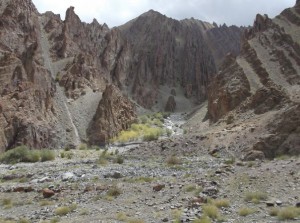 lags . Most of us made our own ways into Stok as the guide got ahead with a small group. There were opportunities to get lost but luckily we came upon the tea house where the others sat under the parachute drinking beer. After a long wait, finally all the group were together again for lunch as we sat looking back at the majestic peak of Stok Kangri standing serenely so far in the distance and the summit looking as unattainable as ever. Were we really there just 24 hours ago ? 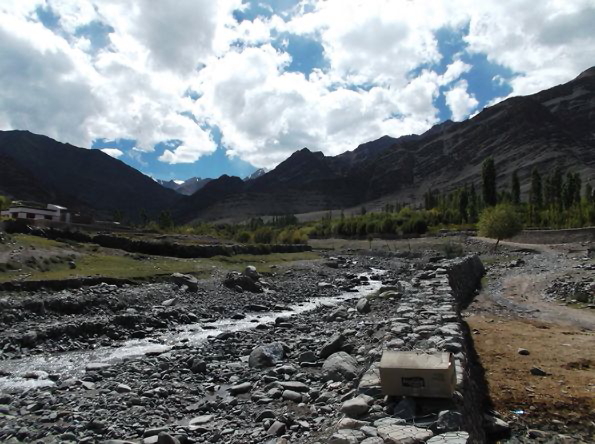 The taxi ride back to Leh was as exciting and scary as ever as our driver clearly thought he was still driving an army truck and resolutely blew his horn to state he was coming regardless of blind corners and other traffic. Back at the hotel it seemed a lifetime since we had last been there and at the same time, no time at all ! Happily relaxing we drank lemon tea and chatted.

That evening we ate at Bon Appetite although as it was a half moon we could not drink alcohol or eat meat although fish was allowed. The moon has great significance for Buddhists as Buddha was born on a full moon, enlightened on a full moon and died on a full moon. Full, new and half moons are dry days for Buddhists. Back at the hotel most of us adjourned to the lounge where the others enjoyed a beer and sampled Katarina’s Czech spirit which by all accounts was lethal. Talking together we learnt more about everyone else’s experiences on the summit and we all complained that the lead guide had set far too fast a pace and despite Clinton’s insistence had refused to slow down. As the first group had started to descend from the ridge their leader who seemed to have lost all interest in them had said, “ You’re free now” and they had had to make their own way down and reaching the glacier on their own some had got lost. Our group were much better off at our slower pace and being overseen by Chosphel who had been an exemplary leader.

It was late when I returned to my room and attempted to pack as instructed for the outward journey with hardly any hand luggage and not being allowed to carry any additional footwear in the cabin. I had not slept when at 4am I needed to get up ready for breakfast and an early flight out of Leh. The airport was a shambles with repeated confusing checks of paperwork and boarding passes, women dragging our heavy luggage away after check in, unpleasantly intimate frisking, frequent power cuts and armed soldiers patrolling the departure lounge and ensuring no one took any photographs.

I slept on the flight and all too soon we landed in Delhi and were back in the mayhem. It was 8.30am on a Saturday so the roads were quieter but still armed police or soldiers stood in the central reservation every few yards. I felt I should at least try to see some of Delhi while I was here as I was certain I never wanted to return. Most of us agreed to share two taxis and set off first to walk around the Red Fort and then on to Connaught Place in the stifling heat. It had obviously been resplendent in its glorious past but now the magnificent pillars were grimy and it all had a shabby, tired appearance. It was a weird experience as expensive European shops were guarded by serious looking doormen and across the road we were searched before entering the slightly cooler underground Palika Bazaar with its garish lights and crazy, manic atmosphere as every trader tried to force you to look at ridiculously cheap designer brands, many poorly imitated and with little attempt at disguising their fraud.

At our celebration evening meal the talk again turned to the design of Nathan and Richard’s Altitude Survival Suit and, once it was recognised as an iconic invention, the film we would commission of its beginnings and which famous people would play each of us. I’m not sure how Maggie Smith would feel about playing Heather Bentley in ‘ASS, The Movie’

And so it was all over. We had met as strangers, bonded as a tight knit team, strived together for the same goal, climbed to 6153 metres, looked down over the Himalayas from the top of the serene Stok Kangri and now we were going home, all going off in different directions to different lives but we would all always share the wonderful memories of an amazing adventure. 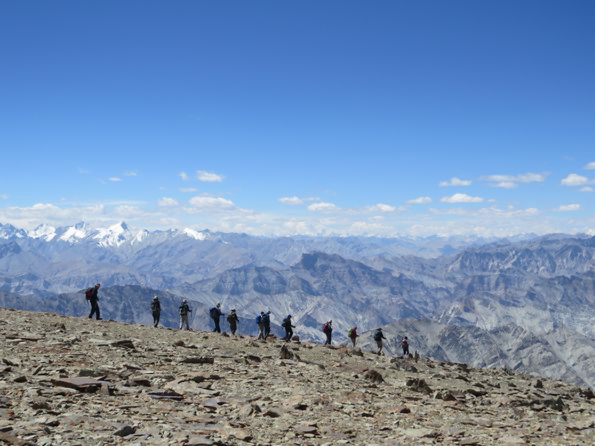 Thank you to everyone who shared this with me, to the wonderful people who supported me, everyone who sponsored me and to Mick who always encouraged me to follow my dreams and would have simply said, “Well done, gal,” as I fulfilled my promise and finally got those poles to the top of a mountain.

Just one foot at a time